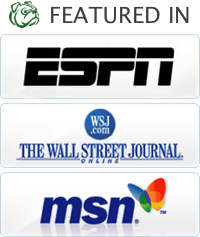 GET PICKS
GET PICKS

I have used several sports picks services. Your company is by far the best. Your customer service kicks ass on all of the others and your web site is put together top notch. I am looking forward to subscribing to the MLB Season Package.
Chris Hatton, Homewood, CA

Outstanding job so far. Your four day total so far is 10 wins and only 1 loss. I have been with other companies in the past and I have never seen a streak like this one. Continue with the great information and detailed newsletters. You certainly have it all at Wunderdog. Thanks for your hard work. You are very informative with your selections and I plan on staying on board. Keep up the good work.
Jim A

I just wanted to take a minute to thank you for being one of the few honest guys in the business. You don't win every time (but no one does) and I am truly impressed with your integrity. If I buy some package from you and I don't show a profit....I get another (same package) free....no questions asked. People are 10x more likely to tell other people about their bad customer service experiences than their good ones. So thanks again for being a standup guy.
Dale, Vancouver Canada

If you are not betting the WNBA, you should be! The WNBA doesn't get the same exposure and media coverage that the other professional sports like NBA.  Get my Guaranteed NBA Picks - I share free picks all season through the playoffs and championship and offer paid guaranteed packages you can buy here. You'll see I have had great results there too. But, I am often asked "why do you even bother making WNBA picks when no one even watches the games?"

Well what does that have to do with expert WNBA basketball picks?

Everything! In order to get more players to bet on WNBA games, the oddsmakers will "shade" the lines to make betting the games more appealing. This results in "soft" lines that can be exploited to turn huge profits. I've been doing it successfully with my premium and free WNBA picks for years. 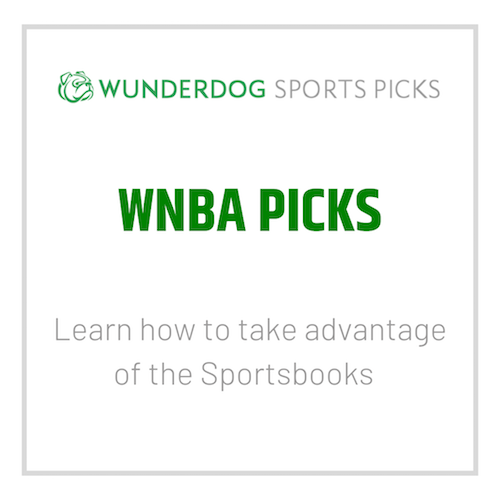 I am able to take full advantage of the fact that WNBA games get overlooked by the sports betting public and don't get the full attention of the sportsbooks. This makes profitable situations easy to spot - if you know what you're looking for. Now let's be honest for a second. I'm not saying that I hunker down on the couch on Saturday night to catch a WNBA game.

I probably couldn't tell you who the MVP was last season, but what I can tell you is that I know how to read the lines and know WNBA situations well enough to make sound educated decisions to predict the winners of WNBA games. I attack the WNBA lines with the same scrutiny and vigor that I do in any other sport. Learn more about my style as an expert sports handicapper here. I won't skimp out just because the sportsbooks and oddsmakers do.

Another great reason to bet on WNBA games is the timing of the season itself. Once March Madness wraps up, the NBA and NHL Finals are in the books, there is only MLB to tide us over to the next NFL season. So unless you enjoy the summer doldrums, betting the WNBA can be a great way to occupy your time - not to mention the fact that you can build your bankroll for the NFL season in the fall.

How do I make my WNBA Picks? We start with the lack of public interest in playing on the WNBA. Most sports bettors make the mistake of focusing on other sports and that is a huge benefit to WNBA bettors that are looking for an edge in sports wagering. I know that the general public is keeping their betting interests on the NBA and other sports and that drives up the value of its betting lines. I know how to utilize these higher-value lines to win and only releases WNBA picks that give my subscribers the best chance of winning. More value means a higher return of your investment. Isn't that what we're all really after anyway?

So what's not to like about the WNBA? There is great basketball action and most of all there is tremendous value and money to be made. Get on board with Wunderdog Sports and watch your winning percentage soar. Start now with well-written, detailed write-ups and free picks delivered each day directly to your email.

WNBA season completed October 2017. The Minnesota Lynx defeated the Los Angeles Sparks by a score of 85-76. It was their 4th WNBA title in seven years, and avenged the loss in the Finals last season to the Sparks.

Both teams battled on a pretty equal basis, not only during the Finals but also during the regular season, so it made sense that the championship would come down to a Game 5. The Lynx won behind 15 points and 20 rebounds from Lynx center Sylvia Fowles. It also healed some of the pain of last season when Ogwumike hit a putback with 3.1 seconds left to give the Sparks the 2016 title. The 10 Finals games between the teams saw the Lynx outscore Los Angeles by just six points (774 to 759).

But for sports bettors, traditionally wagering money on the WNBA doesn’t tend to attract too many square bettors. For one, the games are not always televised and interest is low making the casual bettor more uneducated than normal.

Bets placed on the WNBA are many times up to twenty times less than a standard NBA game.

However, this can also create some unique opportunities for sports bettors. The point can be made that because of the low profile of the sport, oddsmakers and sportsbooks are not as well informed as they would be in other sports. Therefore, point spreads may not always reflect a true and accurate representation of the upcoming game.

Because of the fact that there are only twelve teams in the league, sharp bettors can make it a point to watch all games on the schedule, making themselves more educated on the sport than many of the oddsmakers. This can allow them to shift the actual line a bit before the contest.

Therefore, square bettors should look for a way to follow the sharp bettors leads when it comes to WNBA bets. One way to do this is to monitor reverse line movement. The Reverse Line Movement happens when the betting line (Spread, Moneyline, or O/U) moves in the opposite direction of the betting percentages. Bettors can be alerted to these changes automatically if they subscribe to a service that is able to provide that option or hire a solid handicapper such as Wunderdog to do this for you.

Another strategy is the ability to track steam moves as they relate to the WNBA. A steam move is a change in the sports betting market that happens due to heavy betting action. Steam plays are caused by high-volume bettors or what are sometimes called betting syndicates.

So instead of being scared off by the WNBA, it might make sense to hire a WNBA sports handicapper to help you with your WNBA Predictions today!


Check out my past WNBA Basketball picks

Seattle appears to be too much for the Aces, both offensively and fundamentally after its 104-91 victory on Sunday to go up 2-0 in the series. Breanna Stewart had 22 points whil...

Las Vegas appears to have met its match after enjoying a better-than-expected season, getting into the WNBA Finals. The Aces lost Game 1, 93-80, and had no answer for Breanna St...

The Connecticut Sun will take on the Las Vegas Aces in a deciding Game 5, with the winner moving on to the Finals. The Sun opened the season a dreadful 0-5, but they have really...

Seattle eked out a win in the first game of the series before defeating the Lynx, 89-79, in Game 2 while shooting better than 50 percent and holding Minnesota to 40 percent from...

Connecticut is on the verge of a series upset after closing with a 20-4 run in Game 3, defeating the Aces 77-68. Three Sun players had double-doubles, including Alyssa Thomas wi...

My Divisional Round NFL trends focus primarily on Sunday’s playoff matchups. The Browns are in Kansas City to take on Patrick Mahomes, and Tom Brady faces Drew Brees for the first time in postseason action. When breaking down this weekend’s Divisional Round matchups, the big names say it all. Brady, […]

Round 2 of NFL Playoff betting kicks off Saturday and I’m building off a big opening week, where I was 6-4 (60%) including a 3-1 record with Max Plays. The new NFL playoff betting format features just two teams off a bye in Round 2. The Chiefs and Packers are […]

My NFL Wild Card Picks from the Pound looks at all three Sunday matchups. I have a free pick from the Ravens at Titans and 10 picks total this weekend, including four Max Plays. When a team like the Pittsburgh Steelers (12-4) breaks out of the block with an impressive […]

Today in my Wild Card Weekend betting trends feature, I’m looking at Over/Under trends plus handicapping tips on all three Saturday games. Records are meant to be broken, and perhaps no league does a better job of consistently setting the table for its playmakers to shatter long-standing high marks than […]

Week 17 NFL Picks from the Pound

My Week 17 NFL Picks from the Pound looks at the NFC playoff scenario, and how Seattle can make a play on the top seed with a win and some help. I also have a free pick this week from the Raiders and Broncos. Get a preview and find out […]

Today in my Week 17 NFL betting trends feature, I’m looking at a couple of late-season systems that are live on several teams. Plus, I breakdown the Dolphins at Bills matchup, as Miami looks to punch its ticket to the postseason. Week 17 of the NFL season signals the end […]

The Week 16 NFL betting schedule kicks-off with a Friday contest, followed by three Saturday games. And while that is a little unusual compared to the standard Thursday-Sunday start dates, the early line movement on all four of these games is what really caught my attention. Minnesota at New OrleansFriday, […]

Week 15 NFL Picks from the Pound

My Week 15 NFL Picks from the Pound looks at two teams whose Season Win Total hopes are sunk. I also have a free pick this week from the Texans at Colts. Get a preview and find out how you can get free picks for every sport that I cover, […]

What can I win with WD picks

Wunderdog Sports Picks is an excellent long term investment and I want you to know how much you can expect to win vs. other investment opportunities.

Thirsty for more sports betting information and advice? Check out the Dog Pound, an extensive resource for all sports gambling articles and advice.

Access all of my previous WNBA season records here. Win or lose, I give you visibility to all past pick statistics including my in depth newsletter write-ups.

If you want to know which way the public is betting, this is your page: a collective source for public consensus information on all upcoming WNBA games.

Very impressive! I have found that picking underdogs provides the best winning % - keep it up! thanks.
Paul B., Washington DC

Thanks Wunderdog! Since you became a part in my life I have become a winner. Thank you. Keep the success going!!!!
Matt M., Green Bay, WI