Handicapping and Betting the NHL 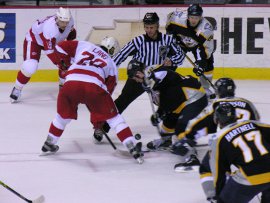 You want to bet hockey? Some bettors do but a lot more don't. Well, in my humble opinion, people who sidestep hockey wagering are missing some great opportunities to fatten their wallets. A primary reason: Vegas oddsmakers are sloppier setting hockey lines than with football, basketball, and baseball combined! They don't pay as much attention because bettors don't pay as much attention. Use this to your advantage!

I'll admit that I'm a huge hockey freak. I make a point to catch a live game in every major city that I visit. And remember – there are 30 cities with NHL franchises! This isn't small potatoes for you who might give the NHL only passing attention. NHL teams play an 82-game regular season schedule and though there is great emphasis on divisional and conference rivalries favorable opportunities to beat the Vegas lines are present almost every night. And when lesser known teams from one conference venture two or three thousand miles to meet up with a team they'll play only once every couple of years – that's when there's almost always a chance to pounce on some real quality bets! I'm here all season to help you take advantage of such opportunities.

Underdogs can come through

First thing you have to understand about the NHL is this – on the surface it's the most topsy-turvy major sport of all time. But it's really not all that baffling if you really devote daily attention to it. We only have to go back to the spring of 2005 for some perfect examples. The Detroit Red Wings appeared to be the class of the 2005-2006 season. They led the NHL in total points and were ranked number one in every published power rating. So what happens in the playoffs? They're immediately eliminated by the 8th place Edmonton Oilers. Though that was the biggest upset all four of the top teams in the West were knocked out in the first round. Incredible! Vegas couldn't believe it as night after night underdogs swamped the favorites. But the bettors couldn't believe it either. Most of them bet those losing favorites.

And the East was only slightly less crazed. There, the top-seeded Ottawa Senators had their faces rubbed in the slush by the Buffalo Sabres a club given no chance before the season started. The Sens were eliminated in just five second-round games. Meanwhile, the New Jersey Devils appeared to have all the momentum in the world after a clean first round sweep of the overrated Rangers. But Jersey was then discourteously shown the exit door by Carolina in just five games. Carolina then needed all seven games to eliminate Buffalo despite the fact that the Sabres were without four of their top six defensemen the entire series. So who did the Hurricanes have waiting for them in the finals? Those upstart Edmonton Oilers! After whipping the seemingly unbeatable Red Wings, the Oilers then ousted big, bad San Jose 4-2 and damned near swept Anaheim winning the conference finals in five quick games. No one outside of northern Alberta could believe it and the Oilers were frequently underdogs even on home ice. In the end, the NHL enjoyed a classic seven-game series final which according to TV rating figures practically no one watched. What a shame. But Vegas was still taking bets and I was still providing selected picks – a majority of which were accurate.

The Importance of Goaltending

The point of all this history is to ask and answer the following questions and hopefully provide you some insights into my way of analyzing the NHL. Why did Edmonton prevail until the absolute final game? Goaltending. Dwayne Roloson got hot at the end of the season and bettors who rode his hot streak enjoyed one of their own. I've always found it odd that baseball always notes the starting pitchers, their records and ERA's while hockey largely ignores goalie stats. I track every goaltender in the league to try to ferret out tendencies. Is he hot, is he cold, is he just erratic? Is he a butterflyer and if so is that slight leg injury going to have more serious consequences when he really has to sprawl? Does he have a tough time with bigger forwards who try to hang out in the crease or with clubs that possess a couple of enormous slapshots? And the most overlooked stat of all – how does the goaltender perform against individual teams? In the case of Edmonton's Roloson, he was troubled by the middlin' Minnesota Wild but the giants of his division were no problem for him.

And Buffalo's spurt to its conference finals should have been no surprise nor its three wins against mighty Carolina. The Sabres had the second biggest factor in considering hockey wagers– a superior coach. ILindy Ruff is one of those rare guys who managed to transition from being a great player to a great coach. A man who understands both the x's and o's of the game, who can motivate a player to give his best and has an instinct for when to make a shift or player change that the opponent just can't counter fast enough. I think coaching match-ups are absolutely key to every game, every night. And yet, millions of dollars are wagered on the sport by bettors who couldn't name the coaches must less know their tendencies.

Finally, lets conclude with consideration number three – the intangibles assets and pitfalls of each team. This is where years of my nightly devotion to following the sport are irreplaceable assets. Because the intangibles of hockey are more numerous than any other sport. They can be summed up in two words – team chemistry. Here's what I mean...

The NHL is beyond fast and furious. This is the only major sport where player changes are made on the fly, where one flick of the wrist can change the entire momentum of a game, where 59 minutes of desperately hard work can go down the drain with one careless pass. Basketball? Screw up and you can redeem yourself ten seconds later. Baseball? The starting pitcher is almost expected to come out after six innings. Football? You've got specialists running on and off the field every play. In hockey, you screw up you better pray you have a teammate who can save your butt. In hockey, that goalie ain't coming out unless he's hurt or your team is getting killed. In hockey, every defenseman on the ice has to be to skate like a forward and every forward better be willing to throw himself in front of a slapshot. This is a team sport like none other. That means that leadership, sacrifice, effort and commitment have to come from every player who ties up his skates or that team has a problem. And believe me, teams have problems. If a Russian and a Czech are feuding, if someone is on the trading block but still expected and suddenly not willing to take the body, if a particular official likes to call everything a physical team likes to do – well, you understand the nuances. If a bettor can keep their ear close to the ice by following every team, every day he will enjoy advantages no other sport provides.

Get my free NHL Picks this season.

Get more information on my NHL Picks page.