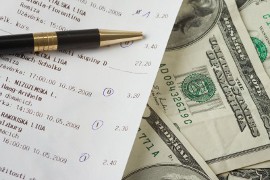 What kind of variance should we expect in betting sports?

We would all prefer low variance, right? If would be great if we could just win every night. But, that just isn't how it works. Sports betting has very high variance. In fact, based on my experience, you should expect about 10-30 times as much variance betting sports than you would experience betting the stock market. Variance will be very high in the short term and reduce over the long term.

It is extremely important to note that thanks to the "law of large numbers", the fewer games bet, the higher the variance. What does this mean? It means that the chances of winning a lot or losing a lot increases as the number of bets decrease. It also means that over the short run, my picks (and all sports betting in general) has a much higher variance than do other investments (like the stock market). The stock market tends to change very little on a daily basis (usually less than 1%). Meanwhile, your sports betting bankroll will see much larger daily swings (sometimes more than 10%).

Another way to think about this is to compare it to diversification in the stock market. If you index (buy every stock in the market), your yearly return will be relatively stable. But if you load everything you have into just a few stocks, your returns will be much more variable (you can win or lose a lot).

Here's another demonstration of variance using something we are all familiar with: sports.

Dwight Howard is one of the best NBA players in history at hitting shots. He makes 57.8% of his shots. And, if we had to guess what his shooting percentage will be over the next month, or the next week or even the next game, we would be wise to guess around 58%. But, the reality is that his shooting percentage could vary greatly from that expected number, especially over small samples. And of course that is what we see. In the 2010-11 regular season, in the 78 regular-season games in which he played, Howard's field goal percent per-game ranged from .250 to 1.000. He had games in during the season in which he went:

He also had games in which he went:

Is this strange to see these great shooters perform miserably? Not really. Over the course of a long career, every great shooter is going to go on some awful runs. The same thing will happen in sports betting.

So, just as elite shooters like Dwight Howard and Ray Allen will have short-term stretches where they vastly under-perform (and over-perform) their average, we will see the same thing in sports betting. And this is 100% normal. It's due to variance (a statistically certainty) and it cannot be avoided. It simply has to be understood and accepted.

So why bet sports?

If variance is high in sports betting (given us a lot of frustration), why do it? Well, the upside is that you can make more money betting sports than you can in most other investments including the stock market. Based on my historical performance, you can expect to do about 4 times better than the stock market with my picks on average over the long haul (although doing better or worse is always possible).

You can mitigate the effects of variance by playing more games. Over a small sample (for example, 100 games), the variance will be high. Over a large sample (say 3000+ games), the variance will be much, much lower. So if your expected outcome is positive (over 52.38% for regular straight sports bets), it's always better to play as many games as possible. This will let the true value shine (vs. the short term which has a lot to due with luck).

If you can get to the point where you can truly understand and emotionally cope with the concepts above, you can do very well in sports betting. Just remember, it's easier said than done!