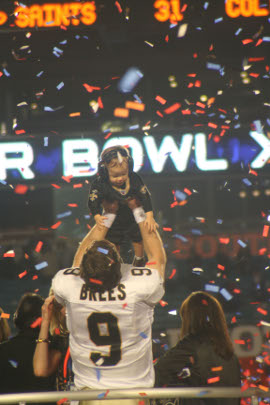 What is a Line Movement?

When the line (spread) moves in one direction or the other, that's a line movement. Lines move often in sports betting. It is a rare line that stays exactly where it was opened by the sportsbooks. Here's an example of a line movement from Super Bowl XLIV.

It's true that their goal is often to split betting activity, getting about 50% of the bets on one side and 50% on the other side. This way they can't lose. They simply pay out the winners (minus their 10% juice/vig) and collect from the losers. The vig/juice on the winning bets ensures them a profit. They can't lose.

But, the oddsmakers' goal sometimes is to actually take lopsided action. They sometimes roll the dice, believing the betting public will be on the wrong side and they can score a huge win.

Despite popular belief, bets are rarely split 50/50 on most games. There is quite often very lopsided betting. To see this in action, check out this consensus betting tool. As you can see, there are often games in which 60%, 70% or even 80% of the action is on one side.

So on any given game, the sportsbooks have high exposure. But, spread over hundreds of games per week, their exposure is relatively limited. The biggest exposure for them, of course, is on the big games in which the betting is so heavy that it dwarfs the betting activity on other events. The most obvious example of this is the Super Bowl. Sportsbooks have massive exposure both positive and negative on this game, given the high number of bets. In Super Bowl XLIV, 65% of the bets were on Indianapolis, meaning that the sportsbooks were rooting for the Saints to cover (which they did).

Sharps vs. the public

Another question I often get is, who exactly moves the lines - the sharps or the public? The answer is, it depends. On low-profile games, line movements tend to be more driven by the sharps. The percentage of money that sharps place on low-profile games is relatively high, so their bets have a bigger movement effect.

One way you can see this is that you will see a game on which the percentage of bets is very high on team A (say 65%), but the line is moving the opposite direction, indicating heavy betting on team B. Despite only 35% of the actual bets coming in on Team B, the amount of money bet on Team B is higher than Team A. In this case, you can bet the movement is due to a few very large bets placed by sharps. The public is betting small amounts on Team A while the sharps are betting massive amounts on Team B. Some people employ a betting strategy that looks for this kind of game, and they go with the side the sharps are on, assuming they know what they are doing.

In football in particular, there are key numbers as it relates to the spread. Due to the scoring structure of football, an inordinate number of football games end with a team winning by 3, 7, 9 and 10 points. The most common margin of victory in football games 3 points (about 15% of the time), followed by 7 points (8%). In contrast, only 3% of games end with a 5-point margin of victory.

This is important as it relates to line movement. Oddsmakers try not to move a line too much, and they try extremely hard to avoid moving a line over a key number. Why? Because it exposes them to massive losses by bettors "middling" them.

A middling opportunity arises when a line moves by a large amount, and/or moves over a key number. This opportunity gives the bettor a chance to win two bets, with little risk. The sportsbooks don't like this :). Here's an example:

Team A is favored by 2.5 points over Team B. Bettors think Team A at -2.5 is a bargain so they place a lot of money on Team A. Seeing the wildly uneven action, the oddsmakers realize they set the line wrong and to encourage more bets on Team B, they move the line on Team A to -3. But, the bets keep coming in on Team A. There is not enough action on Team B. If this continues, and Team A covers the spread, the sportsbook stands to lose big. So, they move the line again, to Team A -3.5 . This does the trick as now a bunch of money comes in on Team B. Some of these new bets may actually be placed by the same people who bet Team A at -2.5.

Anyway, in the end, the sportsbook has about an even amount of money on Team A and Team B. They are safe, right? Wrong!

As you can imagine, the sportsbooks look to avoid this at all costs. They rarely let lines cross key numbers (numbers that are more likely to end up as the final margin of victory). And, they try to get the initial line right so they don't have to move it much.

They will also employ another trick to avoid getting middled. Instead of moving a line over a key number, they will often leave the line unchanged, but change the odds required to bet at that line. For example, you will often see this:

What to do if a line moves

This doesn't mean that when you go to place your bet, your line or odds will exactly match what I send out. When going to place a bet, sometimes you won't be able to find that same line. That can happen for two reasons:

In either case, I am often asked what to do. Let's look what could happen with your bet, assuming you bet it using the new, different line:

The first four scenarios above are good. Obviously, if the line moves in your favor (i.e. I tell you to take the Cowboys at +4.5 and you get them at +5), then it's a good situation. Over the long haul, about half of the time the line moves will be like this, in your favor.

But, what if the line moves against you? What if the Cowboys are now +4 or +3.5 or even +3? In that scenario, you are susceptible to the second four scenarios shown above (#5-#8). What should you do then? Good question. Unfortunately, there is no one right answer.

In order to have one right answer, we'd need to know which of the four scenarios was most likely. But we don't know the outcome of the game yet, so we can't predict whether the line move against you will have a neutral or negative effect. It's nearly impossible to determine beforehand whether that 1-point move will result in scenario 5, 6, 7 or 8. If we could predict with that level of accuracy (down to 1 point) on a regular basis, we'd all be millionaires, right? But we still have a decision to make.

If we lay off the game, or take our bet size down on it, two things can happen. If the bet wins anyway, we may be upset at ourselves for leaving money on the table. If we reduce our bet or pass and the bet loses, however, then we are happy that we saved ourselves some money.

But since we can't know beforehand which of those two things will happen, then what do we do? We apply some logic and we take into account your personal risk preferences.

Risk preference simply refers to how you personally feel about taking risks. If you are a natural risk taker, then you may decide to ignore the line move and roll the dice. Sure, you have a worse line, but if our team wins big, it won't matter. So in this case, you could just play it at your normal level and hope for the best.

If, on the other hand, you can't stand the thought of a line movement turning your winner into a loser and you tend to be risk averse, then you might choose to lay off the game, or at least take your bet size down. You may reason, "Hey if it wins, I will win less but that's ok. It's better than the thought of losing this due to that pesky line change."

What about buying points?

Another option is to buy points to get the spread to match the number at which I released the play. Should you do this? The general answer is no. Why? Because the cost of this over time will eat up your profits. I have studied buying points across all sports and based on the math, the only time I recommend considering buying is when buying 1/2 point on or off of 3 in football. This means you could consider buying +2.5 up to +3, buying +3 up to +3.5, buying -3.5 down to -3 or buying -3 to -2.5. Doing this has been proven to be slightly profitable over the long-haul vs. not buying. Any other buying of points, in my opinion, is a mistake.

At the end of the 2011 football season, I did an in-depth study of buying on and off of the key number of 3 in the NFL. I looked at all games since 1980 and here's what I found:

In the end, it's up to you and how you personally feel about the possible outcomes. If outcomes #5-8 above really scare you and you will be very upset about losing due to a line movement, then back down your play or lay off it. If you aren't really that scared by those scenarios and can take a possible loss in stride, and you tell yourself that sometimes you win, sometimes you lose, and next time maybe a line movement will help you, then you can just let it ride.

If you have further questions, please feel free to contact me.