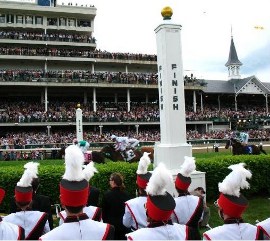 Looking for the next Kentucky Derby winner? Look no further. Wunderdog has been providing winning horse racing tips and picks for a long time. When the Derby rolls around, we step up our efforts. It's one of the three biggest races in the Triple Crown (the others being The Preakness and The Belmont Stakes).

For the 132nd time 3-year-olds will take to the Churchill Downs main track for America’s Race. Of more than 425 horses nominated for the 2006 Triple Crown, only 20 or fewer will run in the Kentucky Derby.

Some contenders hold a noticeable advantage before they break from two gates. Others, however, must buck negative trends that go back decades.

For example, no horse with four or fewer career starts has smelled the roses since Exterminator in 1918. So it doesn’t look good for Showing Up, who won the Lexington Stakes on April 22.

Sunny’s Halo in ’83 was the only horse with two preps that won the Kentucky Derby since ’47. That’s a bad omen for Private Vow and Sharp Humor.

Barbaro, Sharp Humor and Flashy Bull, 1-2-7 in the Florida Derby, will attempt to become the first with a layoff of five weeks or more to score since Needles in ’56.

Runners in Gulfstream’s showcase race that train up to The Derby haven’t done well when it is staged in April. There are exceptions, but those Florida Derby winners later won at Louisville: Northern Dancer in ’64 following the Blue Grass and Tim Tam in ’58 after the Derby Trial.

No horse since Proud Clarion in ’67 won without a stakes victory in his or her career. Goodbye Flashy Bull, Jazil, Mister Triester, Steppenwolfer and Storm Treasure.

An even tougher trend to overcome is finishing fifth or worse in the final prep. Iron Liege last performed the feat in ’57. So the odds are stacked against Deputy Glitters, Flashy Bull and Seaside Retreat.

A pedigree that combines stamina and speed is a big plus. Point Determined is one example. He’s bred to love the 1 ¼ miles and is from the first crop of Point Given, winner of the ‘’01 sophomore races except The Derby, partly because he only had two preps. Bob and John and Jazil were sired by Seeking the Gold, winner of the ’91 Derby.

Other pluses include horses that won at a mile or longer as a juvenile, but it’s not make or break requirement: Deputy Glitters, Keyed Entry, Mr. Triester, Sinister Minister, Steppenwolfer and Sweetnorthernsaint.

Many horses over the years have failed to handle the Churchill Downs surface. So arriving early at Louisville and working over the track is important.

Three workouts, with one marked handily, are ideal and indicate the horse should respond when asked to stretch out.

But it really all comes down to who will put it all together and get a clean trip on May 6.