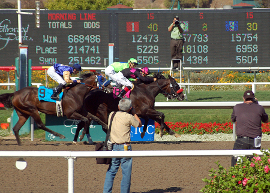 How to Handicap Horses

No matter what your level of expertise, it's often wise to "get back to basics" and review the rudimentary elements of this challenging, sometimes exasperating, bit of mental stimulus known as horse racing handicapping.

Horse racing handicappers approach the process differently but these elements should always be addressed before making a wager. They are offered in order of importance to the overall equation.

After completing these six steps you should have eliminated the pretenders and whittled the field down to the contenders. The more contentious a race looks on paper, the more 'value' you should demand. It makes no sense to back the favorite in a ten-horse field where it looks like five other horses can also win. Make some kind of odds line so that you have an idea of which horses are true overlays in your own mind.

It's no secret that handicapping horses is a time consuming process. You have to watch the races, put in the research and perform in-depth analysis to increase your odds at the track. I spend hours researching my picks, I have a proprietary predictive modeling technique and other strategies that help improve odds of winning. Save time with my free horse racing picks or purchase packages for all the major races right on the site.