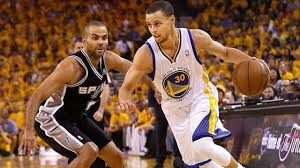 The playing status of center Pau Gasol is currently listed as doubtful for Thursday after he injured his shoulder in Mondayâs game. Kyle Anderson was the only starter in double figures (11 points) in that game and Tony Parker was the leading scorer with 22 points off the bench. The Spurs went just 6-for-22 from three-point range in that game. Overall, they are ranked 27th in the league in scoring with 102.3 points per game.

Golden State continues to keep pace with the blazing Houston Rockets for the top spot in the Western Conference with a SU six-game winning streak. It failed to cover 15-point spread in Tuesdayâs 114-101 victory against Brooklyn at home to fall to 2-5 ATS over its last seven outings. The total has stayed UNDER in four of the Warriorsâ last five games. They are now 25-7 SU at home with a 14-17-1 record ATS.

It has been business as usual for Golden State during this current winning streak. Stephen Curry led all scorers on Tuesday with 34 points, while Kevin Durant and Klay Thompson added a combined 37 points to help pace the win. This trio has accounted for more than 62 percent of the teamâs NBA-high 116.0 PPG scoring average. Draymond Green rounds things out as the leader in both rebounds (7.7) and assists (7.4). The only chink in the armor is a 107.5 points-allowed average that is ranked 20th in the league.