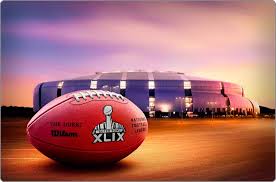 The best day of the football season is almost here as Super Bowl XLIX is a little over 24 hours away. This gives fans, sports bettors and people who are looking to make a few bucks a chance to wager some money on the big game or more so the prop bets that are being featured.

This year the list of prop bets continues with some crazy list of bets including what color will Bill Belichickâ€™s hoodie be and how many times will deflated footballs be talked about during the game. These are the bets that make it interesting for really anyone including someone who might not be to interested in the big game.

For the game itself the line has bounced around all week starting at the Seattle Seahawks as a one point favor nearly two weeks ago. Since that the spread continued to move the in the New England Patriots direction with some sports book having them as a one point favor while other sites have it as a pick em. The over/under has also slowly trended down after opening up at 48.5 points on January 28th and now sits at 47.

Here are some of the top prop bets for Super Bowl XLIX.

Will there be a safety in Super Bowl XLIX: This is one of the most popular prop bets currently on the book paying out around 5 to 1 odds. If you look back at the past three Super Bowls each contest featured one starting with an intentional grounding three years ago against the Patriots, the Baltimore Ravens took an intentiol safety in Super Bowl XLVII and a bad snap resulted in one for Peyton Manning and company last year.

Groundhog Day/Super Bowl Parlay: Yes you read that correctly as Monday Punxsutawney Phil is set to determine how much longer winter will be. Unfortunately they are calling for some bad weather which plays into this prop bet. If you go with him not seeing his shadow and the Patriots the payout is 11/5 while the same pick with the Seahawks is paying 12/5 odds.

How many viewers will the game have: The over/under on the amount of viewers for this years Super Bowl is 113 million. In three of the last four years the number has been in the 111 million range. This year however with all of the deflate gate twist we could see a rise much above the 113 million.

How long will it take Idina Menzel to finish the National Anthem: The time is set for two minutes and one second with many sports bettors looking at the under. In her last two public appearances with the National Anthem, Menzel took just over 2 minutes at the 2014 MLB ALL-Star game and only one minute and 34 seconds during the 2007 NFL finale.