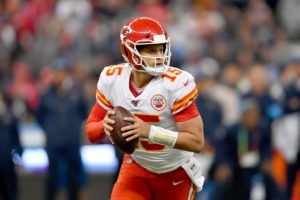 A battle for AFC West supremacy will go down this Sunday, as the 7-4 Kansas City Chiefs are set to host the 6-5 Oakland Raiders, who could tie things up in the division with a victory with only a few weeks left in the NFL season. The Raiders are reeling off of an ugly loss to the Jets a week ago, one in which they were unable to get into the end zone even once. The Chiefs come in after beating the Chargers on the road two weeks ago, 24-17, and having a bye last week.

Both teams come in mostly healthy, but Raiders leading rusher Josh Jacobs has been limited with a shoulder injury all week. Jacobs does hope to play Sunday but is currently questionable.

Read on to learn more about the game in our Oakland Raiders at Kansas City Chiefs betting preview.

Raiders coach Jon Gruden didnât look very happy as the clock reached zeroes last week. His team walked off the field following a 34-3 defeat, a game in which Carr was benched late so he wouldnât get injured in a blowout. The Raiders had won three straight before allowing the Jets to run them all over the field on Sunday. Gruden and Carr look to rebound against the Chiefs this Sunday.

Carr is completing an elite 70.9 percent of his passes in 2019, tallying up 2,621 yards and 15 touchdowns on the season. He only has six interceptions but has been sacked 16 times for 102 yards in losses. The Raiders must improve up front in protection, and also in penalty yards as well. If any coach in this league hates penalties, itâs Gruden, so his players should be well motivated to improve.

With all the recent talk of Baltimore’s Lamar Jackson being the best quarterback currently in football, Mahomes will look to make fans and pundits remember who he is this week. Although the Jackson chatter is likely a case of recency bias at its finest, Jackson has looked elite, and since returning from injury, Mahomes has looked, well, slightly injured. Mahomes and head coach Andy Reid say he is healthy, though, and ready to get back on track Sunday.

On an offense that hasnât been great running the ball, Mahomes has been able to spread it out to a variety of receivers, not only due to a few injuries in the receiving corps this year but also because his guys are just a really deep group. Tight end Travis Kelce remains one of the few elite receiving tight ends in the game. Kelce has four touchdowns on the season and leads the team with 834 yards. Match that with the speed of Tyreek Hill, Mecole Hardman, and Demarcus Robinson, and youâve got quite a dynamic bunch.

In what is set up for what could be the most important game for both teams on the season, look for an epic matchup Sunday. Both teams are 6-5 against the spread this season, covering just 54.5 percent of the time. The Chiefs are 2-3 ATS at home this season, with the Raiders marching them at 2-3 away. Their betting trends donât exactly spell a clear favorite, so their on-field play will have to determine where your money goes.

For more on this contest, check out our matchup page for the game.Â And for a look at other games around the NFL, take a look at our public consensus page.