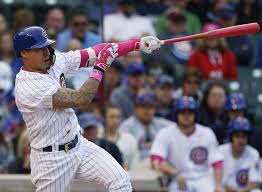 The Cubs started their current 11-game road trip with a 2-2 series split against Miami. They won the first game 11-1 last Thursday night as -142 road favorites before dropping two of the next three games while scoring a grand total of seven runs. The total stayed UNDER closing line in all three of those contests. Chicago is now 38-37 on the year with a losing 16-21 record away from home.

Eddie Butler is scheduled to get the start for the Cubs on Monday night. The right-hander is 3-2 on the year with a 4.19 ERA and a 1.42 WHIP through eight previous starts. Last Wednesday against San Diego, he allowed just one earned run on five hits in four innings pitched. Butler has failed to pitch past the fifth inning in each of his last seven outings. ChicagoÃ¢â¬â ¢s lineup has averaged 4.7 runs through its first 75 games this season, which is currently ranked ninth in the National League.

Washington lost to Cincinnati 6-2 on Sunday as a -152 favorite at home after winning the first two games of this weekend series. This followed a 4-3 run through its recent seven-game stint on the road against Miami and the New York Mets. The NationalsÃ¢â¬â ¢ lead in the NL East stands at nine games over Atlanta on the strength of an overall record of 45-30. When it comes to wins and losses at Nationals Park, they are 20-15 this season. The total has gone OVER closing line in 10 of their last 13 games overall and something to consider when making MLB baseball picks.

Look for Washington to turn to Gio Gonzalez as its starter in this series opener. The left-hander picked up his seventh win of the season against just one loss by holding the Marlins to three earned runs on six hits in a full seven innings of work. He benefitted from the 12 runs his team put on the board in that game. The Nationals continue to be the most prolific scoring team in the NL with an average of 5.7 runs in their first 75 games played.