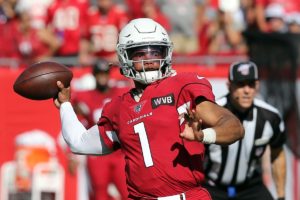 The bottom half of the NFC West will square off this Sunday when the reeling Los Angeles Rams head to Phoenix to face the Arizona Cardinals as part of NFL Week 13. The Rams are coming off a massive loss to the Ravens, as has been said about a lot of teams this season after playing Baltimore. The Cardinals sit in last place in the West and are only 3-7-1, while the Rams sit in third and are currently 6-5 on the season.

The Rams are favored by three points in this one, with the over/under set at 47 in the matchup. Check out our betting preview for this contest.

Sean McVey and the Rams are out to disprove the myth of the Super Bowl hangover this year; unfortunately, they arenât doing a very good job of late. McVeyâs decision-making has come into question for the first time in his tenure as head coach, and question marks are back to haunt Jared Goff for the first time during his time under McVey. And even scarier for Rams fans, Todd Gurley, whose health has been in question all season, has seemingly lost a step.

Moving forward, Goffâs decision-making must improve. Heâs thrown more picks than touchdowns this season, with 12 and 11, respectively. His completion percentage is down from nearly 65 percent a year ago to 61 percent in 2019. Goffâs ability to read defenses has always been in question, and, moving forward, he must improve to keep the Rams alive in the NFC.

Arizona fans had high hopes after drafting Murray No. 1 overall in the 2019 NFL Draft; unfortunately, those hopes have been dashed to bits. At times in this offense, Murray has looked like a game manager. The question is, was it his fault, or is he just playing within the Kingsbury system? I believe itâs the latter, as, at times, Murray has shown his explosiveness with both his legs and arms. The offense itself may need some adjusting.

The Cardinals defense ranks 31st in the NFL in yards allowed this season. Not great for a rookie quarterback and coach trying to make an impression, as the other side of the ball hasnât been much help. At times, itâs looked like Chandler Jones, Jordan Hicks, and Budda Baker have been taking an entire offense on by themselves.

Against the spread this season, these have been two of my favorite teams to bet, and moving forward, should remain that way. The Rams are 7-4 ATS overall, while the Cardinals are 7-3-1. The Cardinals have been dogs in nearly every game this season, and are 7-2-1 when they are, including 3-1 at home. The Rams are 3-1 ATS on the road as favorites, 6-3 ATS overall when theyâre favored.

The Rams’ recent mishaps should make for some interesting moves in Vegas this week, especially with Arizona playing well against the spread. For more on this battle, check out our matchup page for the game.

And for more from around the NFL, go to our public consensus page.