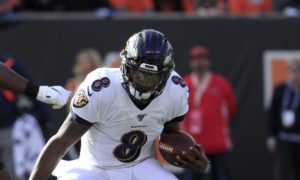 A couple of AFC division leaders square off this Sunday in Baltimore. The 7-2 AFC North-leading Baltimore Ravens host the 6-3 AFC South-leading Texans. The two teams havenât met since 2017 and have faced off 10 times overall. The Ravens are 8-2 in matchups against the Texans since 2002. Both teams look to stay hot, as the Ravens have won five straight, and the Texans have won three straight.

The Ravens are 3-1 at home this season, while the Texans are 3-2 on the road. These two teams have historically been known for their defenses, but this season itâs the offenses of both teams that have been impressive.

The Ravens rank second in the NFL in yards per game, and the Texans are right behind them, sitting at fourth. Only 225 total yards separate the teams on offense. Baltimore is currently a four-point favorite in the contest, with the over/under sitting at 49.5.

Not Bad For A Running Back

Ravens rushing leader Lamar Jackson was asked after one of his better passing performances earlier this season how he thought he did. His response was epic, ânot bad for a running back.â A shot at NFL Draft scouts and teams that chose not to draft Jackson.

While it has been his running game thatâs elite, in fact, on pace to break Michael Vickâs quarterback rushing record, his ability to throw from both within the pocket and scrambling has been far from pedestrian as well.

The Jackson-led rushing attack is ranked No. 1 in the NFL in yards, yards per attempt, and touchdowns. While the Ravens are only ranked 20th in passing yards per game, much of that can be attributed to the fact they rank 29th in passing attempts. This isnât a cause for concern as they just havenât really been tested enough to throw it around a lot.

The Ravens defense hasnât been the old Ray Lewis and Ed Reed-led dynasty defense that Baltimore fans are used to this season. In an effort to help the D out a bit, the Ravens acquired cornerback Marcus Peters from the Rams a few weeks ago.

While Peters isnât a complete shutdown corner, he takes chances at the right moments. In the three games heâs played for Baltimore, Peters has two pick-sixes, including a dazzling 89-yard return for a touchdown last week against Cincinnati.

Texans quarterback Deshaun Watson is doing the same thing his counterpart for the Ravens is doing this season, making every NFL team that passed on drafting him pay. Watson has been a vocal leader of the Texans, especially since the loss of J.J. Watt.

The Texans’ passing attack has been quite a bit better than Baltimoreâs. The Texans rank 12th in passing yards and fifth overall in touchdowns with 18. Coincidently, that’s the same number of scores their pass defense has given up.

Much like the defense of their opponent, the Texans sit right in the middle of the NFL in total defense. However, if there’s one huge thing that the Texans do better than the Ravens, itâs stop the run. They have only allowed 758 rushing yards this season, good for third in the league.

The Ravens arenât just beating teams; theyâve been blowing them out. Not only that, but two of their last three wins have come against the Seahawks and the Patriots. They may be the only team that has made the Pats look fairly easy to beat this season; however, Baltimore is 4-4-1 against the spread this season and only 1-3 at home.

The Texans havenât quite beaten the firepower that Baltimore has this season, but they were able to blow out the Jags last week and the Chiefs last month. They are only 5-4 against the spread this season but are 4-1 on the road. This, combined with their better passing game and ability to slow down the run, should make for an interesting matchup, to say the least, this week. Certainly, one that you wonât want to miss.

For predictions on this epic battle, go to Wunderdog’s matchup page for this contest.Â For a deeper look into other matchups around the NFL, check out Wunderdogâs NFL public consensus page.

Comments Off on Houston Texans vs. Baltimore Ravens Betting Preview