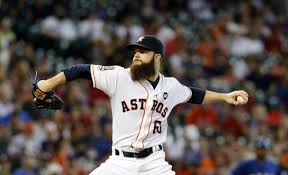 The 2018 MLB Schedule action heats up this weekend with a solid list of series taking to the diamond as the first weekend of May has arrived. One of those series will take place out West, as the Houston Astros make the trip to Arizona to take on the Diamondbacks. For these two teams they enter this key Interleague contest sitting in first place in the American League West and the National League West.

On paper this is an intriguing matchup between two first place teams that should deliver a ton of excitement for fans as well as a chance for sports bettors to cash in. ÃÂ The first game of the series will get rolling at 9:40pm as the Astros send Gerrit Cole to the mound while the Diamondbacks counter with Kris Medlan. Here is a quick look at the pitcherÃ¢â¬â ¢s matchup for Friday Night.

The Astros made a big decision to acquire Cole during the offseason and he hasnÃ¢â¬â ¢t disappointed through his first six starts. Over that stretch, Cole has pitched to a 1.73 earned run average while allowing less than two earned runs in five of six starts (3 earned run in last outing). Cole has been overpowering for opponents striking out 61 batters over just 41.2 innings of work. Over the last three seasons, Cole has a 1-2 record against the Diamondbacks pitching to a 2.39 earned run average over 26.1 innings of work.

After failing to land a MLB deal this offseason, the 32 year old veteran inked a minor league deal with the Diamondbacks. Despite some struggles at the Diamondbacks Triple-A affiliate, he will be making his first start of the season against a very good Astros team as he fills in for Robbie Ray who is currently dealing with an oblique strain. Medlen who showed promise during the 2013 season has battled through multiple Tommy John surgeryÃ¢â¬â ¢s over the past few years. Over the limited past three seasons, Medlen is 1-0 against the Astros in only one start while yielding two runs over five innings striking out seven.

As these two red hot teams will look for some strong pitching performances the teams will also rely on their high-powered offenses to back those starters. Here is a quick look at a few of the key offensive weapons for each team.

Carlos Correa Ã¢â¬â Correa is slowly becoming one of the games top stars while slowly developing an all around approach at the plate. Through the start of the 2018 MLB season, Correa is off to another strong start hitting .307 over 114 at bats with nine doubles, five home runs and 22 runs batted in. Over the last three seasons, Correa has dominated Diamondback pitching hitting .359 over 39 at bats with two triples and four home runs.

Jose Altuve Ã¢â¬â Along with Correa, Altuve might be one of the games top faces as he continues to dominate night in and out. For Altuve, he enters Thursday batting .331 with two home runs to go with 15 runs batted in. Much of that success has come over his last seven games as he has at leat one hit in each contest (one double, two home runs and five runs batted in). The MVP has also produced against the Diamondbacks over the past few seasons picking up 21 hits over 61 at bats (five doubles, two triples and one home run).

A.J. Pollock Ã¢â¬â While all eyes are on Goldschmidt, Pollock is putting together possible one of the best seasons in all of the Majors. The Diamondbacks outfielder is hitting .304 to start the season with 10 home runs to go with 25 runs batted in. Pollock is also a threat on the base path picking up seven stolen bases to start the season.

Here is a quick look at the rest of the pitching matchups for the weekend series between the Astros and Diamondbacks.