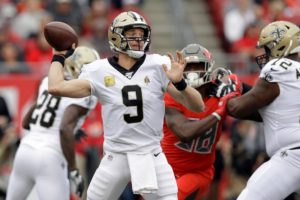 The NFL season is to Week 12, so strap in for an NFC South battle this Sunday, as the Carolina Panthers head to the Bayou to square off against the New Orleans Saints. In what has become a two-horse race in the South, this matchup is the most important that Carolina has played in this season, as they trail the NFC South-leading Saints by three wins. A loss would all but destroy the Panthers’ chances at a comeback win of the division.

The Superdome is a difficult place to go into and steal a win from the home team as it is. Itâs as potent a home-field advantage as anywhere in the league. Drew Brees is not only looking for his sixth NFC South championship but also his eighth playoff appearance since joining the Saints, and he is chasing down a few more records to add to the several he already owns.

New Orleans is an 8.5-point favorite in this contest, with the over/under being set at 47. Check out our betting preview for this important game.

New Orleans will see someone other than Cam Newton at the helm of the Panthers for the first time in a while as Kyle Allen took over for an injured Newton in Week 3. Since taking over for the 0-2 Panthers, Allen has led the team to a 5-3 record. Unfortunately, heâs also thrown nine interceptions to only 10 touchdowns, though the eye test tells you that he hasnât been as bad as those numbers may suggest.

Offensively, this teamâs identity has a name, and itâs Christian McCaffrey. The video game numbers heâs putting up have helped Carolina and fantasy footballers decimate defenses all season. McCaffrey is averaging over 157.6 total yards per game and is on pace for over 2,521 total yards, which would beat Chris Johnsonâs yards from scrimmage record from 2009 of 2,509 yards.

Led defensively by linebacker Luke Kuechly, the Panthers have the talent to have a tough unit on that side of the ball. Even outside of Kuechly, the players’ individual stats look like they should be a force, but it just isnât a cohesive unit, and the Panthers’ secondary is pretty weak. The defense gives up 5.5 yards per play.

And They Come Marching

Not a bad situation for Brees to return from injury to, as backup Teddy Bridgewater played out of his mind and ended up going 5-0 in the veteran quarterback’s absence. That being said, the Saints are coming into the game with a disappointing 27-9 loss to the divisional rival Falcons, who have only won three games all season, in recent memory. Although beating the Bucs 34-17 last week did wipe some of the taste out of their mouths, they know they can’t take anyone lightly.

With Brees at the helm and a suspect passing defense for Carolina, look for Brees to air it out to the NFLâs leader in targets, yards, and catches, Michael Thomas. Thomas averages 114 yards per game. Alvin Kamara will likely get his workload in both the pass and run game, as heâs been the teamâs second-best receiver as well as its best back.

Defensively, the one thing that the Saints do well is stop the run. Their defense ranks third in the league in rushing yards per game, so McCaffrey will have his work cut out for him. Cam Jordan and company will need to get to Allen early to keep McCaffrey from continually turning check-downs into first downs, something theyâre familiar with in Kamara.

Do You Feel Lucky?

The Saints are lights out at home, every season since forever it seems like; however, theyâre only 3-2 against the point spread at home this season. Not that that is bad, as it’s just a bit worse than their 4-1 overall at home. The Panthers are 3-2 on the road both straight up and against the spread.

This matchup always seems to bring the best out of both teams, and with playoff implications, expect somewhat of a battle here. For more on this battle, check out our matchup page.

To check out some other great matchups around the league, go to our NFL consensus page.