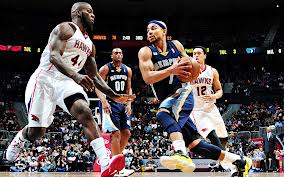 People who bet college basketball and the NBA often have to change their views when they go between these two sports. One reason has to do with the availability of blowouts in the NBA. The league is just not designed to allow teams to blow one another out. The benches are too deep, the pace is too high, and the games are too long. Teams tend to come back on one another when you think they might not. InÃÂ college basketball, a highly superior team might beat another team by 30. That will not happen often in the NBA, because the talent differences are much smaller.

As a bettor, this is information that you need to take into account. When you make yourÃÂ NBA predictions, you have to be very wary of those big spreads. Even if the favorite jumps out to a nice lead, it might not mean anything. It might only mean that the other squad is going to come back in the end. Blowing a team out in the NBA requires a lot of luck, and you donÃ¢â¬â ¢t want to be on the other side of that.

This is not to say that the NBA does not have blowouts. It has plenty of games where one team will crush another. But these things tend to happen randomly and for no good reason at all. It will happen when one team is just too tired to care in a second half. If you are going to lay big points, make sure you are doing it against a tired team. Otherwise, your NBA picks might get sunk.