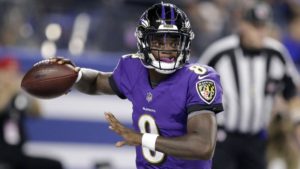 Prepare yourself for some fireworks heading into Monday Night Football this week. The Baltimore Ravens and their league-best rushing attack head to Los Angeles for a game with the Rams. Baltimore has won six straight games coming into the contest and doesnât look to slow down. The Rams have won two of their last three but havenât looked much like the defending NFC Champs from a year ago.

The Ravens are 8-2 and have a commanding three-game lead over the Steelers in the AFC North headed into the weekend. Theyâve scored 341 points on the season, blowing the field away. The Rams are 6-4, trailing both the 9-1 49ers and the 8-2 Seahawks in the NFC West. They cannot afford to lose this game and remain in the NFC playoff picture. Baltimore is favored by -3.5 points, with the over/under set at 46.5. Check out this betting preview of this exciting game.

Baltimore comes into the week leading the league in a lot of offensive categories. Most of them involving rushing, as you would assume. The Lamar Jackson/Mark Ingram tandem has been incredibly difficult to stop all season, as the rushing attack is No. 1 in yards, attempts, yards per attempt, and touchdowns on the season. They rank second in first downs and total yards, as well.

Jackson is averaging over five yards before first contact this season. Heâs going untouched at linebackers that he can clearly outrun. While his passing game doesnât get a ton of hype, itâs been very good. They just donât use his arm that much. Heâs thrown 19 touchdowns to only five picks, with a passer rating of 105.6. Put that together with a Michael Vick-like run game, and it is potent stuff.

The Rams have played so well since their move to Los Angeles, that even weird wins seem to worry fans. While they havenât played their best football in 2019, they arenât far off the mark. If any team can negate the Baltimore rushing attack, itâs the front seven of the Rams. The Rams allow the second-fewest rushing yards per game to opponents. Runners only average 1.8 yards before contact against the Rams, best in the NFL, and hopefully for them, Jacksonâs kryptonite.

While Jared Goff and the Sean McVey offense havenât looked as explosive, and Todd Gurley seems to have lost a step, especially in the last few games, the offense still ranks top 12 in total yards. Brandin Cooks is still in concussion protocol and questionable for Monday night, so Cooper Kupp and Robert Woods will lead the way for Rams receivers. Kupp has frustrated corners and safeties alike all season.

Clash of the Titans

Aaron Donald vs. Lamar Jackson on Monday Night Football? It looks like the NFL will have no issues getting high ratings this week. The battle between the Ravens offense and Rams defense should be one for the ages, but it could likely be the other side of the ball for both teams that determines the winner of this game.

For more details on this contest, check out our matchup page for this game.Â And for more from around the NFL, go to our NFL consensus page.