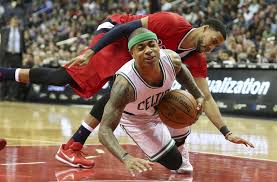 The Wizards won all three of their home games against Atlanta straight-up to take that opening round series in six games and it just hammered Boston two straight times at home by a combined 46 points to even this Eastern Conference Semifinal series at two games apiece. Unfortunately, they have to play this game on the road where they have gone 1-4 both SU and against the spread in five previous postseason contests.

To try and break this pattern, Washington is going to need another stellar effort from John Wall and Bradley Beal as the teamÃ¢â¬â ¢s top two scorers. After they each averaged 23.1 points in the regular season, Wall has bumped things up to 28.8 points per game in the playoffs with Beal adding 23.6 PPG. The Wizards ranked fifth in the NBA in scoring during the regular season with 109.2 points a game and through 10 postseason games this year they have been able to score at least 111 points in each of their last five outings.

Boston has also played night and day in this series starting with the lopsided victories at home in the first two games. Following two losses at home to Chicago (SU and ATS) in the opening round of the playoffs, The Celtics responded with six wins in a row both SU and ATS. The total has gone OVER in the two home games against the Wizards after staying UNDER in the final four games against the Bulls. The winning team in the first four games of this conference semifinals matchup has posted at least 116 points.

Much of BostonÃ¢â¬â ¢s success in the postseason can be attributed to the elevated play of Isaiah Thomas, who has been dealing with the recent death of his sister. He put up 53 points in a 129-119 victory in Game 2 with the Celtics listed as five-point home favorites and his scoring average through 10 postseason games stands at 25.6 PPG. Boston was seventh in the NBA in scoring in the regular season with 108.0 PPG and it has averaged 120 points in its last three home games. 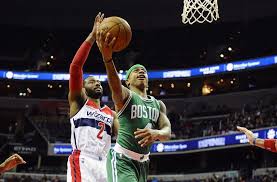 Boston lost the first two games in its opening round playoff series against Chicago closing as a home favorite, but since then it has gone a perfect 6-0 both straight-up and against the spread to eliminate the Bulls in six games and take a 2-0 series lead into Game 3 of this Eastern Conference Semifinals clash. The total went OVER the 218.5-point line in TuesdayÃ¢â¬â ¢s 129-119 overtime victory against Washington in which the Celtics closed as five-point favorites at home. The total has gone OVER in the first two games after staying UNDER their previous four contests.

It was the Ã¢â¬ËIsaiah Thomas ShowÃ¢â¬â ¢ in Game 2 that ended with Boston outscoring the Wizards 15-5 in overtime. He ended the game with 53 points while going 18-for-33 from the field. The Celtics shot 51.1 percent from the field and they connected on 13-of-36 shots from three-point range. Their scoring average through eight postseason contests now stands at 109.0 points per game.

The Wizards also needed six games to get past Atlanta in the first round of the playoffs after losing a pair of games on the road both SU and ATS. With the total going OVER closing line in TuesdayÃ¢â¬â ¢s loss, it has gone OVER or ended as a PUSH in six of their first eight postseason games. Washington brings a SU 7-1 record in its last eight home games into ThursdayÃ¢â¬â ¢s Game 3.

John Wall did his best to keep pace on the scoreboard with 40 points in TuesdayÃ¢â¬â ¢s loss and the rest of WashingtonÃ¢â¬â ¢s starters ended that game with at least 13 points apiece. The Wizards connected on 46.5 percent of their shots from the field, but they went just 10-for-34 from beyond the arc. Washington ended the regular season ranked fifth in the NBA in scoring with an average of 109.2 PPG and it has now scored at least 111 points in its last three outings.