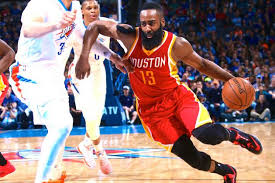 The Thunder went an even 6-6 straight-up (5-7 against the spread) to close out the final 12 games of the regular season starting with a 137-125 road loss to Houston on March 26 as 5.5-point road underdogs on BetAnySportsÃ¢â¬â ¢ closing line. They started the postseason in the same fashion by losing Game 1 of this best-of-seven series 118-87 as 7.5-point underdogs on the road. The total went OVER 230.5 in that March loss; however it stayed UNDER the closing 228-point line in SundayÃ¢â¬â ¢s loss.

Russell Westbrook has been the story for Oklahoma City this season in his drive towards a probable league MVP award. He ended SundayÃ¢â¬â ¢s game with 22 points, 11 rebounds and seven assists. Andre Roberson was the only other starter in double figures with 18 points. The Thunder shot just 37 percent from the field while going 9-for-29 from three-point range. On the year, they averaged 106.6 points per game, which was the 11th-highest total in the NBA.

Houston has extended its current SU winning streak against the Thunder to four games after losing to them early in the season on the road. Game 1 of this series was the first time that the Rockets covered BetAnySportsÃ¢â¬â ¢ closing spread in their last 10 games and the total has stayed UNDER in seven of those games during this costly ATS slide. Houston is now 31-11 SU at home this season with a 19-23 record ATS.

The Rockets also have a MVP candidate leading the way in James Harden and he definitely came out on top in his first postseason head-to-head matchup against Westbrook with 37 points in SundayÃ¢â¬â ¢s win. Houston shot 49.5 percent from the floor and it outrebounded the Thunder 56-41. The Rockets were the second-highest scoring team in the NBA this season with an average of 115.3 PPG, but it fell all the way to 26th at the other end of the court with a points-allowed average of 109.6 points a game.

The Grizzlies came up well short in SaturdayÃ¢â¬â ¢s Game 1 this best-of-seven opening round playoff series with a 111-82 loss as 9.5-point road underdogs on closing betting line. They have now lost six of their last seven games straight-up while going 2-5 against the spread. The total went OVER 190.5 points in SaturdayÃ¢â¬â ¢s loss and it has gone OVER three of their last five games. Back on April 4, Memphis covered as a nine-point road underdog in a 95-89 loss to the Spurs. The total in that game stayed UNDER 195.5 points.

To reverse this recent losing trend against their Southwest Division rivals, Memphis is going to need a much better effort from an offense that was ranked 29th in the NBA in scoring with an average of 100.5 points per game. With just 82 points in Game 1, this offense has failed to eclipse the century mark in six of its last eight games. Marc Gasol ended SaturdayÃ¢â¬â ¢s game with 32 points while going 11-for-18 from the field, but the rest of the GrizzliesÃ¢â¬â ¢ starting five accounted for a total of 25 points.

San Antonio closed out the regular season with three SU losses in its last four games while going 2-4-1 ATS over its last seven outings, but it appeared to be in solid postseason form in SaturdayÃ¢â¬â ¢s opener. The total has now gone OVER ÃÂ closing line in four of its last five games. The Spurs went 31-10 SU at home this season, but going back to a 97-90 victory against Memphis at the AT&T Center on March 23 as 7.5-point favorites, they are 3-6 ATS in their last nine home games.

Kawhi Leonard has been San AntonioÃ¢â¬â ¢s leading scorer all season long with an average of 25.5 PPG and he led the way in Game 1 with 32 points while going 11-for-14 from the field. Lamarcus Aldridge added 20 points and veteran point guard Tony Parker ended the game with 18 points. The Spurs remain one of the most balanced teams in the NBA with an offense that is scoring 105.3 PPG complementing a defense that is second in the league in points allowed (98.1).