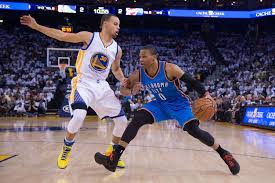 The last time Golden State faced Oklahoma City on the road was Feb. 11 and it rolled to a 130-114 victory as an eight-point favorite behind Kevin DurantÃ¢â¬â ¢s 34 points. Flash forward to Monday nightÃ¢â¬â ¢s rematch and it could be a completely different story with Durant still out of the lineup with a knee injury and the Warriors struggling through a straight-up 5-5 record in their last 10 games. They have gone a costly 3-10 against the spread in their last 13 outings and the total has stayed UNDER closing line in their last six games.

Without Durant, Golden State has only scored more than their league-high 116.2 average in three of its last 10 games, but it did just put up 122 points against Orlando and 117 points against Milwaukee in its last two contests to cover as a double digit favorite at home. Stephen Curry scored 28 points in the win against the Bucks after Klay Thompson led the way against the Magic with 29 points.

Since that mid-February loss at home to the NBAÃ¢â¬â ¢s top team, the Thunder have gone 9-5 SU and they bring a five-game winning streak (both SU and ATS) into MondayÃ¢â¬â ¢s Western Conference clash. After beating Toronto 123-102 as a two-point road underdog last Thursday, Oklahoma City returned home to thrash Sacramento 110-94 on Saturday as a heavy 12.5-point favorite. It is now 26-9 SU at home with a profitable 24-11 record ATS.

A quick start out of the gate led to a 22-point lead by the half against the Kings as part of three-straight victories by a double digit margin. The Thunder have averaged 113.8 points during their current six-game tear as opposed to a 106.9-point scoring average that is ranked 10th in the NBA. Russell Westbrook scored 28 points against Sacramento after posting a triple-double against Toronto with 24 points, 16 assists and 10 rebounds. 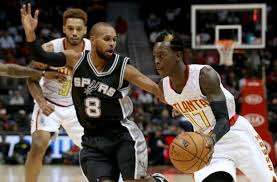 The Hawks bring a three-game straight-up winning streak into Monday nightÃ¢â¬â ¢s contest after hammering Memphis 107-90 on Saturday as 6.5-point road underdogs closing line. The total stayed UNDER 206 points in that win and it has stayed UNDER in three of their last five games. They are holding down the fifth spot in the Eastern Conference standings at 37-29 on the year. However, Atlanta has been a tough team to bet on lately with a 3-8 record against the spread in its last 11 outings in NBA picks.

Taurean Prince led the Hawks on Saturday with 17 points off the bench while Paul Millsap and Dennis Schroder added 16 points each to the winning cause. Atlanta shot 50 percent from the field against the Grizzlies while also converting on half of its 30 three-point attempts. This team is ranked 20th in the NBA in scoring with 104.0 points per game and its 104.4 points-allowed average is 11th in the league.

In a possible preview of this seasonÃ¢â¬â ¢s Western Conference Finals, San Antonio pasted Golden State 107-85 on Saturday night as an 11-point home favorite with much of the star power for both teams on the bench. The total stayed UNDER ÃÂ closing 197.5-point line and it has stayed UNDER in five of its last seven games. With just one SU loss in their last 11 games, the Spurs are now a game and a half out of the top spot in the West at 50-13 SU. They are 24-6 SU at home this season with an even 15-15 record ATS. The total has stayed UNDER in six of their last eight home games.

The Spurs were without Kawhi Leonard and LaMarcus Aldridge against the Warriors and both players could also be out of the lineup against the Hawks. Tony Parker is also questionable with a bad back so San Antonio may once again have to turn to its reserves to pick up the win. Patty Mills filled the void on Saturday night with team-high 21 points and Davis Bertans added 13 points off the bench. Defense may have to once again carry the Spurs as the second-ranked unit in the league in points allowed (98.3). 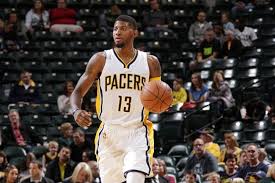 The Pistons are coming off a huge 109-95 victory against Chicago on Monday night as six-point home favorites to keep them tied with the Bulls for the seventh spot in the Eastern Conference standings. They have now won five of their last seven games both straight-up and against the spread to improve to 31-32 both ways on the year. The total stayed UNDERÃÂ ÃÂ closing 204.5-point line in MondayÃ¢â¬â ¢s win and it has stayed UNDER in nine of their last 13 contests.

Detroit got a solid performance from its entire lineup against Chicago with six different players ending the night in double figures. Reggie Jackson led the way with 26 points while going 11-for-16 from the field. The Pistons shot 48.9 percent from the floor and they outrebounded Chicago 48-37. On the year, Detroit is averaging 102.1 points per game, while holding opponents to 102.1 points at the other end of the court.

Indiana is just a game ahead of the Pistons in the East at 32-31 SU (29-34 ATS). With MondayÃ¢â¬â ¢s 100-88 loss to Charlotte on the road as a 4.5-point underdog with BetAnySports, it has just three SU victories in its last 12 games. The Pacers have failed to cover in half of those 12 outings and the total has stayed UNDER in their last eight games. They are 21-10 SU at home on the year with a 16-15 record ATS.

Paul George did his part on Monday night with a game-high 36 points while pulling down 10 rebounds, but it still was not enough to overcome a slow start out of the gate that resulted in a 21-point deficit at the half. Indiana has the slight edge on the scoreboard in WednesdayÃ¢â¬â ¢s matchup with 104.9 PPG, but it is allowing an average of 105.9 points on defense.