DetroitÃ¢â¬â ¢s 100.6 points per game scoring average is ranked 24th in the NBA and it is shooting 45.5 percent from the field. Point guard Reggie Jackson is the teamÃ¢â¬â ¢s leading scorer with 17.2 points per game and with 24 points in SaturdayÃ¢â¬â ¢s loss he has exceeded that total in his last four starts. The Pistons are still one of the better defensive teams in the league with a points-allowed average of 101.6, but they have given up an average of 112.3 points in their last three games.

Isaiah Thomas went off for 37 points in SaturdayÃ¢â¬â ¢s win while going 6-for-11 from three-point range. He leads Boston in scoring with 29.1 PPG which is the second-highest scoring average in the NBA. He also leads the team in assists with 6.3 a game and he is shooting 46.6 percent from the field. Boston also got a strong performance from Jae Crowder against the Bucks with 20 points and six rebounds. The Celtics are sixth in the league in scoring with 108.1 PPG, but they fall to 20th in points allowed (105.7). 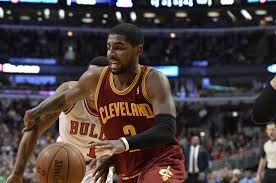 The Kings were able to snap a straight-up five-game losing streak on Monday night with a stunning 109-104 victory against Detroit as seven-point road underdogs with BetAnySports. This was their third road game in a row as part of an extended eight-game road trip. Sacramento has now covered against the spread in its last two games following a 4-9 skid ATS that dates all the way back to Christmas. The total has stayed UNDER in six of its last nine games.

DeMarcus Cousins led all scorers in MondayÃ¢â¬â ¢s win with 22 points while going just 8-for-22 from the field. However he did add 14 rebounds and six assists to the winning cause. The Kings are ranked 22nd in the NBA in scoring with an average of 102.5 points per game and they comes in at 20th on the list in points allowed (105.4). Despite CousinÃ¢â¬â ¢s team-high 10.3 rebounds a game, Sacramento remains one of the worst rebounding teams in the league with 40.7 a game.

Cleveland is coming off back-to-back losses to San Antonio at home and New Orleans on the road as a favorite in both contests. The Cavaliers are just 2-5 both SU and ATS in their last seven games which is by far the worst slide of the year in light of their overall record of 30-13 SU (18-23-2 ATS). The total went OVER BetAnySportsÃ¢â¬â ¢ closing 215.5-point line in MondayÃ¢â¬â ¢s 124-122 loss to the Pelicans as 10-point road favorites and it has gone OVER in four of their last five games.

Even the best teams in the league go through some rough patches over the course of an extended 82-game regular season, but there has to be some concern with ClevelandÃ¢â¬â ¢s play in the month of January. Going back over the past four games, the Cavaliers have averaged 111.5 PPG, but at the other end of the court they have given up an average of 117.8 points. On the year, they are scoring 109.6 points verse a points-allowed average of 104.9. 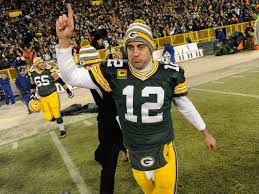 Green Bay will be bringing a ton of momentum into Big D this Sunday coming off a solid 38-13 victory over the New York Giants in the Wild Card Round as a five-point favorite at home. This extended the PackersÃ¢â¬â ¢ current straight-up winning streak to seven games while going a profitable 6-1 against the spread. The total went OVER BetAnySportsÃ¢â¬â ¢ closing 46.5-point line in that game and it has now gone OVER in their last five games something to consider when making your football picks.

One of the main reasons for the PackersÃ¢â¬â ¢ recent success has been the elevated play of veteran quarterback Aaron Rodgers. He ended the regular season ranked fourth in the league in total passing yards (4,428) and his 40 touchdown throws were the most in the NFL. In SundayÃ¢â¬â ¢s win against New York, he threw for 362 yards and four scores. One injury of note is wide receiver Jordy Nelson, who is considered doubtful for Sunday with fractured ribs.

The Cowboys were the class of the NFC all season long at 13-3 SU and while they went a solid 10-5-1 ATS, there has to be some concern for bettors with a 1-4 record ATS over their last five games. The total stayed UNDER BetAnySportsÃ¢â¬â ¢ 44-point line in a season-ending 27-13 loss to Philadelphia and it has stayed UNDER in five of their last six games. Dallas opens the playoffs at home where it went 5-2-1 ATS this season.

There is no doubt that the one-two punch of Dak Prescott throwing the ball and Ezekiel Elliott running it had a lot to do with the CowboysÃ¢â¬â ¢ turnaround this season from a 4-12 record in 2015, but both of these rookies will be under the gun on Sunday given the added pressure of this game. Dallas also got a strong effort on defense as the fifth-best unit in the league when it came to points allowed (19.1). More good news for the Cowboys in light of their recent bye week is that most of the players on their injury list have been upgraded to probable. 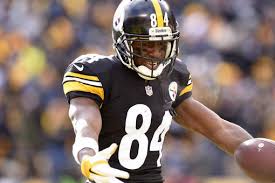 The Pittsburgh Steelers will be looking to extend their current straight-up winning streak to nine games this Sunday following last SundayÃ¢â¬â ¢s 30-12 victory against Miami in the Wild Card Round as heavy 11.5-point home favorites. The total line at BetAnySports stayed UNDER 47 in that game after going OVER in three of PittsburghÃ¢â¬â ¢s previous four contests. The Steelers have gone a profitable 6-1-1 against the spread during this run and they are 5-3 ATS in eight previous road games this season.

Ben Roethlisberger tweaked his foot in last weekÃ¢â¬â ¢s win to aggravate an old injury, but he remains listed as probable for SundayÃ¢â¬â ¢s game. Big Ben throwing the ball to Antonio Brown and handing it off to LeÃ¢â¬â ¢Veon Bell is an offensive combination that has the ability to carry Pittsburgh all the way to the Super Bowl if these Ã¢â¬ÅKiller BÃ¢â¬â ¢s Ã¢â¬Å keep playing at such a high level. In last weekÃ¢â¬â ¢s win against the Dolphins, Roethlisberger hooked up with Bryant five times for 124 yards and two touchdowns while Bell added 167 yards and two more scores on the ground.

Kansas City closed out its regular season with five victories in its last six games both SU and ATS en route to the AFC West Division title and a first round bye. The Chiefs were 12-4 SU with a 9-7 record ATS, but they did fail to cover in five of their eight regular-season home games. The total has now gone OVER in four of their last six games following a 37-27 win against San Diego in Week 17 as 5.5-point road favorites with BetAnySports.

While the combination of Alex Smith throwing the ball to tight end Travis Kelce with Spencer Ware anchoring the ground game has not produced the same gaudy stats as Kansas CityÃ¢â¬â ¢s opponent in this game, this has been a very effective trio of playmakers all season long. What the Chiefs really need is another strong performance from a defense that was ranked seventh in the NFL in points allowed (19.4), since it is doubtful they could keep pace if this game turns into a shootout. 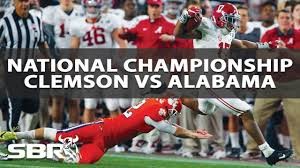 No. 2 Clemson Tigers vs. No. 1 Alabama Crimson TideÃÂ

ClemsonÃ¢â¬â ¢s return trip to the College Football Playoff Championship against a very familiar foe hit some bumps along the way with a few close calls and a loss to Pittsburgh, but when push came to shove it proved it belonged with a 31-0 shutout of Ohio State as a 1.5-point underdog in the CFP semifinals. The Tigers are now 13-1 straight-up on the year with a 7-7 record against the college football picks spread. The total stayed UNDER BetAnySportsÃ¢â¬â ¢ closing 57-point line against the Buckeyes after going OVER in their previous four games.

Deshaun Watson completed 23-of-36 passing attempts in last SaturdayÃ¢â¬â ¢s win for 259 yards and a score and the Tigers rushed for another 205 yards on 48 carries, but the big story in that game was the play on the other side of the ball. Clemson held the Buckeyes to just 215 yards of total offense in that dominating win. This was after this unit gave up 35 points to Virginia Tech in the ACC title game.

The Crimson Tide turned in another perfect performance in its return trip to the national title game at 14-0 SU capped off by last weekÃ¢â¬â ¢s 24-7 victory over Washington as 13-point favorites in the other semifinal game. Alabama was able to cover the spread in 10 games this season despite closing as a double-digit favorite in 13 of those14 contests. The total stayed UNDER BetAnySportsÃ¢â¬â ¢ 51.5-point line against the Huskies and it has now stayed UNDER in five of its last seven games.

It remains to be seen how the sudden departure of offensive coordinator Lane Kiffin effects the TideÃ¢â¬â ¢s game plan for Monday night, but it would be safe to assume that they will try and pass the ball a bit more after gaining just 57 yards through the air against Washington. They rolled up 269 yards on the ground in that game so we already know that we will still see a big dose of the running game. Alabama is another team that relies heavily on its dominant defense. This unit held the Huskies to a total of 194 yards last week. 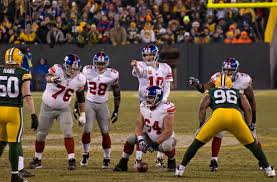 The Giants made their way into the playoffs as the fifth seed in the NFC after posting a straight-up record of 11-5 in the regular season. They were one of the hottest teams in the league since mid-October with a SU 9-2 run in their last 11 games while going 8-3 against the spread. The total stayed UNDER in 12 of 16 games this season on BetAnySportsÃ¢â¬â ¢ closing line. New York went 8-6-2 ATS overall including an even 3-3-2 record on the road.

Veteran quarterback Eli Manning ended the regular season with 4,027 yards passing and 26 touchdown throws against 16 interceptions. His top target all year long was Odell Beckham Jr. with 101 receptions for 1,367 yards and 10 scores. New York did struggle to run the ball with an average of just 88.2 rushing yards a game, but it closed out the season on a strong note with 161 yards on the ground in a win at Washington.

Green Bay dug itself into a 4-6 hole with a mid-season four-game losing streak, but it comes into the playoffs as one of the hottest teams in the league at 10-6 after winning its last six games to claim the NFC North Division title. The Packers went 5-1 ATS during this run and the total went OVER BetAnySportsÃ¢â¬â ¢ closing line in their last four games. They went 5-2-1 ATS in seven home games this year.

The Packers have really turned up the heat on offense down the stretch with 30 points or more in those final four games. Aaron Rodgers returned to MVP form to lead the NFL in passing touchdowns with 40. He threw four scoring strikes in a Week 17 win at Detroit that helped clinch the division title. Green Bay ended the regular season ranked eighth in the league in total yards per game (368.8) and it was fourth in scoring with an average of 27 points a game.ÃÂ