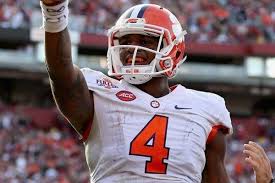 No. 3 Ohio State Buckeyes vs. No, 2 Clemson Tigers

The Big TenÃ¢â¬â ¢s Buckeyes had just one straight-up loss this season against 11 wins, but it was not an easy ride back to the College Football Playoff semifinals with an even 6-6 record against the spread. They survived more than a few close calls including extremely tight finishes against Michigan State and Michigan by a combined four points to close out the regular season. The total has gone OVERÃÂ closing line in three of Ohio StateÃ¢â¬â ¢s last four contests.

The star power on this team revolves around JT Barrett at quarterback and Mike Weber as the lead running back. Barrett finished the season with 2,428 passing yards and 24 touchdown throws against just five interceptions. He was also the teamÃ¢â¬â ¢s second leading rusher with 847 yards on the ground. Weber ran the ball 177 times for 1,072 yards and nine touchdowns for an average of 6.1 yards a carry. Ohio StateÃ¢â¬â ¢s defense had just as much to do with the teamÃ¢â¬â ¢s success behind a points-allowed average of 14.2.

Clemson is another team making a return trip to the CFP semifinals with an overall record of 12-1. The Tigers were 7-1 SU in the ACC this season and it got past Virginia Tech 42-35 as 10.5-point favorites in the conference title game. That was just one of quite a few tight games this season that resulted in a 6-7 record ATS. They failed to cover in five of their last seven games and the total went OVERBetAnySports closing line in their last four games.

When it came to offensive firepower for Clemson as the 14th-highest scoring team in the nation (40.2 points), the primary weapon was junior quarterback Deshaun Watson. He has finished in the top three of the Heisman Trophy voting the last two seasons as one of the top players in the country. Watson threw for 3,914 yards and 37 touchdowns this season while also running the ball 129 times for 529 yards and six scores. The Tigers also relied heavily on a defense that was 12th in the country in points allowed (18.4). 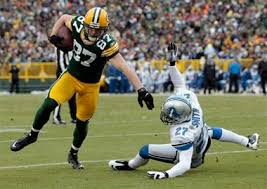 Green Bay comes into this NFC North title bout riding a straight-up five-game winning streak and it has gone 4-1 against the spread with BetAnySports. The total has gone OVER in its last three games behind a scoring average of 35.3 points a game. Overall, the Packers are 9-6 SU with a 7-7-1 record ATS and the total has gone over in nine of the 15 games. One concern for bettors is a 2-5 record ATS in seven previous road games this year.

There is no doubt that Green Bay is playing its best ball of the season at just the right time with victories over Houston, Seattle and Minnesota as part of this five-game winning streak. Aaron Rodgers is back to MVP form and in last weekÃ¢â¬â ¢s victory against the Vikings he threw for 347 yards and four touchdowns to help pace the win. The Packers still have some pressing issues with their running game after gaining only 40 yards against the Vikings and their defense allowed 353 yards through the air in that game.

The Lions will need to quickly regroup following Monday nightÃ¢â¬â ¢s 42-21 loss to Dallas as 6.5-point road underdogs with BetAnySports. This loss came on the heels of a 17-6 setback to the New York Giants as four-point road underdogs the week before. Detroit is now 9-6 SU with an 8-7 record ATS and the total has stayed UNDER in eight of its last nine games. The one bright spot is a 5-2 ATS at home this season and it has gone 5-4 ATS when closing as an underdog.

Detroit is going to need one more big effort from its veteran quarterback Matthew Stafford to pull off the upset on Sunday night. He has thrown for 3,980 yards and 22 touchdowns this year. Stafford has been hampered with a finger injury in his throwing hand the past few games, but the Lions will be hard pressed to rely on a ground game that is ranked 30th in the NFL with an average of 82.3 yards a game. 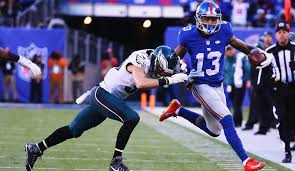 The Giants are in excellent shape to make the playoffs as a wild card at 10-4 straight-up on the year and they still have an outside shot at winning the NFC East if they win their final two games and Dallas loses both of its remaining contests. Along with a high level of motivation heading into this ThursdayÃ¢â¬â ¢s division rivalry, they also have quite a head of steam with an 8-1 SU run in their last nine games while going 7-2 against the spread. The total has stayed UNDER in New YorkÃ¢â¬â ¢s last six games on closing line.

Veteran quarterback Eli Manning continues to play at a high level with 3,491 passing yards and 25 touchdown throws and his favorite target all season long has been Odell Beckham Jr. with 85 receptions for 1,173 yards and 10 scores. The biggest reason for the GiantsÃ¢â¬â ¢ success this season has been the elevated play on the other side of the ball with a defense that is ranked third in the NFL in points allowed (17.9).

A promising start with four wins in PhiladelphiaÃ¢â¬â ¢s first six games has deteriorated to a SU record of 5-9 in the midst of a five-game losing streak. The Eagles did manage to cover in last weekÃ¢â¬â ¢s 27-26 loss to Baltimore as five-point road underdogs to move to 6-8 ATS. The total has gone OVER in their last three games. The only bright spot for bettors is a 4-2 record ATS at home this season.

The blame for this collapse can be spread to both sides of the ball. Rookie quarterback Carson Wentz has looked the part during this current slide after a fast start out of the gate. He has thrown for 3,385 yards and 13 touchdowns against 13 interceptions and he has been sacked 31 times. The EaglesÃ¢â¬â ¢ defense has also gone in the wrong direction with a points-allowed average of 27.8 over the last five games. 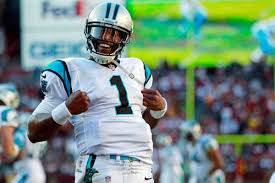 Carolina has been reduced to playing the role of spoiler at 5-8 straight-up after winning 15 of 16 regular season games last season. The Panthers have also been a big disappointment to bettors with a 4-7-2 record against the spread on closing line. They are just 1-4-1 ATS on the road this season and the total has gone OVER in five of those six games. The total has actually stayed UNDER in four of their last six games overall when it comes to NFL football picks.

The Panthers are ranked 20th in the league in both passing yards (231.2) and total yards (340.3) per game with Cam Newton struggling with consistency at the quarterback position. He has thrown for 2,774 yards and 15 touchdowns while completing just 53.5 percent of his 398 attempts. The former league MVP has also tossed nine interceptions while getting sacked 29 times. CarolinaÃ¢â¬â ¢s defense has also gone in the wrong direction and it comes into this game ranked last in the NFL against the pass and 28th in points allowed (25.9).

The Redskins are 7-5-1 SU with a healthy 9-4 mark ATS and they desperately need a win to stay in the hunt for one of the two wild card playoff spots in the NFC. Washington is coming off a 27-22 road victory against Philadelphia as a two-point favorite with and it has covered the spread in five of its last six games. The total went OVER 48.5 points in last SundayÃ¢â¬â ¢s win and it has now gone OVER in its last six contests.

Washington will need another strong effort from its quarterback Kirk Cousins to come out on top this Monday night. In last SundayÃ¢â¬â ¢s win against the Eagles, he completed a very efficient 14 of his 21 passing attempts for 234 yards and two touchdowns, but he also threw an interception that resulted in a Philadelphia score. Robert Kelley continues to lead the RedskinsÃ¢â¬â ¢ ground game with 587 yards rushing and five touchdowns on 128 carries. This offense is ranked third in the NFL in total yards with an average of 412.1 a game. 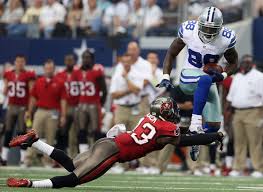 The Buccaneers are on a roll with a five-game winning streak both straight-up and against the spread. Last SundayÃ¢â¬â ¢s 16-11 grinder against New Orleans as two-point favorites at home with BetAnySports raised their overall record to 8-5 (SU and ATS). The total stayed well UNDER 50.5 points in that game and it has now stayed UNDER or ended as a PUSH in their last four outings. Tampa Bay has been good to bettors this season when getting points with a 7-3 record ATS as an underdog.

The improved play of Jameis Winston in his second season as the BucsÃ¢â¬â ¢ starting quarterback is one of the reasons for this yearÃ¢â¬â ¢s success, but a big portion of the credit should go to a very opportunistic defense that is tied for the league lead in takeaways with 25. The defense added three more interceptions last week against the Saints to help secure the win. Overall, Tampa Bay is 18th in the NFL in points (22.5) and 16th in points allowed (22.8).

Dallas still has the best SU record in the NFC at 11-2, but it has dropped to 9-3-1 ATS after failing to cover in its last three games. Last Sunday nightÃ¢â¬â ¢s 10-7 loss to the rival New York Giants as a 3.5-point road favorite was the fourth time in its last six games that the total stayed UNDER BetAnySportsÃ¢â¬â ¢ closing line. The Cowboys do return home with a 4-1-1 record this season ATS.

Rookie quarterback Dak Prescott has been the toast of the town in Big D this season, but he has come under fire for his recent performance in that loss to the Giants. For the third game in a row he has failed to throw for more than 200 yards and in Sunday nightÃ¢â¬â ¢s loss his completion rate was just 45.9 percent of 37 passing attempts. Dallas still got a big effort from rookie running back Ezekiel Elliott on the ground with 107 yards on 24 carries, but for the second game in a row it came nowhere close to meeting its scoring average of 26.2 points a game. 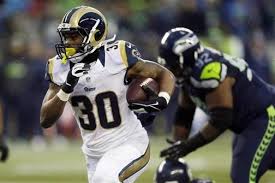 The Rams will be looking to end a four-game skid both straight-up and against the spread as huge road underdogs when they take the field this Thursday night in Seattle. Going all the way back to a Week 5 loss to Buffalo, they are just 1-8 SU in their last nine games with a 1-7-1 record ATS. The total has stayed UNDER in five of their last seven games. When it comes to playing on the road, Los Angeles is 3-4 ATS this season.

Last weekÃ¢â¬â ¢s 42-14 pasting at the hands of Atlanta was the final straw for Jeff Fisher as the teamÃ¢â¬â ¢s head coach. This is one of the big reasons why the spread on this game at BetAnySports ÃÂ is so high, but it also has to do with an inept RamsÃ¢â¬â ¢ offense that has fallen to last in the league in both yards (286.2) and points (14.9) per game. The only bright spot with this team has been a defense that is ranked 10th in the NFL in yards allowed (340.5).

SeattleÃ¢â¬â ¢s stunning 38-10 loss to Green Bay last week as a three-point road favorite has dropped its overall record to 8-4-1 SU and 6-6-1 ATS. More importantly, the loss has dropped the Seahawks out of the top two playoff sports in the NFC. They will return home with a 3-2-1 record ATS this season at CenturyLink Stadium and the total has now gone OVER in four of their last six games overall. They already lost the first meeting against Los Angeles this season and going back over the past five meetings they are just 1-4 (SU and ATS) against the Rams.

I would look for a much better effort from Russell Wilson on Thursday night simply because it would be hard for him to play any worse than he did last week in Green Bay. Wilson ended that game with 240 yards passing and once touchdown throw against five interceptions and a completion rate of 56.4 percent. Even the SeahawksÃ¢â¬â ¢ vaunted defense played well below expectations as the Packers basically scored at will all game long.