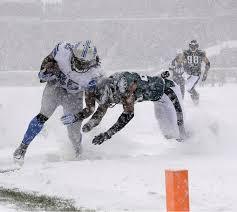 There are lots of skills that can help you with your footballÃÂ picks. Who would have thought that one of the skills was being a good weatherman? While you don’t need to be Jim Cantorie in order to make football picks, you do need to have some understanding of the various factors that can influence outcomes. Here are three weather types to think about.
Wind
People underestimate the effect of wind when they look at lines. While rain and things can get lots of attention, it is wind that can impact two critical aspects of a game – kicking and passing. If you are looking at a matchup between a good running team and a good passing team in a windy environment, then you might want to favor the club that can run the football.
Rain
Of course, rain is the most common thing you will encounter when you handicap. As you make those football picks, know that the impact of rain will depend upon how much there is. When teams are playing in intense rain, the impact on the passing game with be substantial. However, if the rain is light, then there can actually be a positive effect for offense. A slightly slick field is good for offense, while a drenched field can slow things down.
Extreme Cold
Extreme cold can make kicking more difficult, but it has not been demonstrated to have a huge impact on scoring unless it is accompanied by some other factor, like wind. However, teams that often play in the cold are often better prepared for these challenges, especially when they are up against teams that play in a dome. 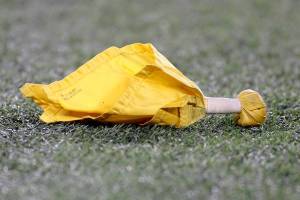 When you’re sitting down to make NFL picks this year, you’ll think a lot about offense and defense. You might consider coaching and special teams, as well. If you really think about things, though, you’ll know the factors that tend to influence games the most. Turnovers are plays that can shift momentum, cost you points, and cost you possession. How about penalties? Are they important? Here, we’ll talk about those things to help you with your NFL picks and college football picks.

Turnovers are exceptionally important when you’re making football picks. Statisticians like to take a look at those plays that have the greatest impact on whether one team wins or loses. When they look at the totality of a game, these statisticians calculate something called “win probability added.” Plays that weigh heavy on a game’s outcome have a higher WPA, while other plays have a low WPA. Turnovers tend to have the highest WPA, so you need to know whether a team is likely to cough it up. Especially in those instances where you’re looking at a close spread, choosing a club that protects the ball can be very important.

How about penalties? How much do they matter when you make NFL picks? The truth is that penalties matter less than you think. People tend to remember penalties in big spots, and an ill-timed penalty can certainly be hard to handle. Over the course of time, however, it has been demonstrated that penalties and winning have little correlation. In college football, teams like Miami and Florida State dominated the 1990s despite high penalty totals. In the NFL, the 49ers have found success recently despite their propensity to get flagged.

As you engage in your NFL handicapping this year, your ultimate goal should be making money. While some people do it for the pride, and other people do it for the entertainment value, the smart bettors understand that when it comes to betting, it’s all about the cash. Here are three ways to make money over the long run.
Fading the public
Over the short term, the public might have the ability to win some of their bets. Even the average Joe who is throwing darts will hit close to five out of every ten bets. Over the long run, though, the public is likely going to lose more than they win, especially when they line up on a popular side. If you fade the public over the long run, you’ll have a much better chance of coming out on top.
Don’t underestimate a good week’s rest
Think of how good you feel after you’ve had some time off. NFL teams are no different. Often, a struggling team just needs an extra week off in order to re-boot. If you think hard about playing those teams coming off of a bye week, you’ll end up with better NFL picks results over the long haul.
Cap the trap
One of the best rules for NFL pickers is to handicap the trap. If you have ever heard commentators talk about “trap” games, then you know what this rule refers to. Is a team playing a rival next week? Do they have to travel a long distance to play that rival? These are cases when you can handicap the trap, taking the unpopular side against a team that is in a trap game situation.

As you make your NFL picks, you may be confronted with teams that are out down and out. You’ll find teams that have been run over by the media, and it looks like there is no way they can win. Often, when you’re making NFL picks, these are the opportunities you’ll be waiting for. The down and out team is often undervalued by the public, and this makes for great betting opportunities.

The New England Patriots of 2014 are an excellent example. This is a great franchise with lots of good players, but in the early of the year, they had fallen on hard times. On a Sunday night with most bettors lining up to make money against the Patriots, they rose up and got a huge win. They circled the wagons, so to speak, which was a major factor in their success. What is the lesson to be learned from this? When teams look like they are on their last leg, it might just be time for you to throw your money behind them.

Quite often, the public gets it wrong about teams. As you make your NFL picks, you should be keeping your eyes open for spots just like these. The people who make money on NFL picks are those who are willing to look beyond just what they have seen over a two or three week sample. You should be thinking about value and the long term, and sometimes that means taking a hard look at the down and out team.