Want to play every single WSOP Holdem event this year without having to take out a second mortgage? Because you can and you donÃ¢â¬â ¢t even have go to Vegas to do it!ÃÂ

BodogÃ¢â¬â ¢s latest tournament series brainchild is the MiniSOP. The MiniSOP is an online tournament that mirrors all of the Holdem events of the World Series in Vegas with truly affordable buy-ins set at 1% of the Vegas events!ÃÂ

From May 30th Ã¢â¬â July 3rd players can play for cash, Tournament Credits, position on the Mini-SOP leader board and a place in the final tourney where they will compete for three 2009 WSOP Main Event seats!ÃÂ

Get the complete details on this exciting new online tournament series and be the first person on your block sporting a shiny, new seat to next yearÃ¢â¬â ¢s Main Event!

In every offseason in virtually every sport, we hear over-paid and over-hyped athletes demanding to be traded. This past summer none whined louder and stomped his feet harder than Los Angeles LakesÃ¢â¬â ¢ superstar Kobe Bryant. From having to endure listening to him demand to be traded on every sports radio show to every ESPN offseason NBA report, the annual Ã¢â¬ÅKobe is unhappy and wants to be tradedÃ¢â¬Â shtick had gotten to be old hat Ã¢â¬â the same song drilled in our heads over and over like a bad American Idol tune.

Bravo to the Lakers brass that denied Kobe the trade he so demanded (I have it on good authority that Bryant actually held his breath and turned purple when making his demand to be traded).ÃÂ  So then, what to make of this turnaround from Ã¢â¬Åtrade me nowÃ¢â¬Â to NBA MVP and now Finals participant? When did the Black Mamba decide he was going to rise above the pettiness and carry this Lakers team to one of the best regular season finishes and a NBA MVP award?

Kobe assumed Ã¢â¬â dare I say Ã¢â¬â a leadership role anchoring the Lake show as they plowed through the defenseless Nuggets, toppled the Jazz on their own floor to now accepting the changing of the old guard (San Antonio), to bring the Lakers back to ye olde days of Showtime basketball.

The theft of Pao Gasol and his suiting-up for LA certainly helped, but KobeÃ¢â¬â ¢s turnaround goes deeper than that. There comes a time in almost every elite athleteÃ¢â¬â ¢s career where money, fame, cars, etc. ceases to matter, ceases to be a motivating factor. In place of all that fluff is the intense desire for one thing and one thing only Ã¢â¬â to be a champion. Bryant reached that point this season.

After being dogged for so many years for not being able to win a title without Shaq and seeing OÃ¢â¬â ¢Neal win another championship in Miami without Bryant served as motivation, an almost direct challenge that put his career in perspective. If Kobe wanted to be considered among the greatest of all time he needed to find a way to win this year Ã¢â¬â and he did.

So as we are beginning to formulate our NBA picks for the Finals, what will happen this offseason if the Lakers fail to bring the championship trophy back La-La land? What if the Association gets its way and the Lakers and the Celtics meet in the Finals and Boston wins the series? Will Kobe up to his old Jordin Sparks song-and-dance routine and demand another trade this offseason? This may come as a shock to some, but I think the curtain has closed on such antics. If the Lakers donÃ¢â¬â ¢t win the big one, I think Bryant accepts responsibility for the loss learns from it and uses it as motivation for next season.

We have just witnessed the changing of the guard as the Lakers supplanted the Spurs as the team to beat in the west, but the change that will have more of an impact is the change from ye olde Kobe to a more mature, on-the-court leader that will eventually be included as one of the all-time greats. 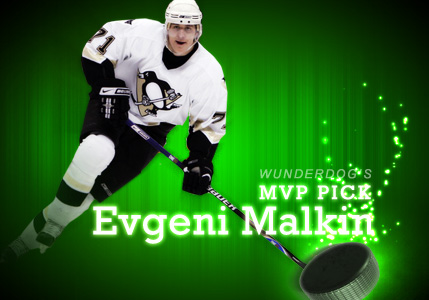 Our unanimous choice for the 2007-08 NHL season is Pittsburgh Penguins forward Evgeni Malkin.

The 6-3 lefty was the second overall pick by the Pens in 2004 and has been on a steady climb to the top of the NHLÃ¢â¬â ¢s elite and has reached the pinnacle in his fourth season. This season Malkin ranked No. 2 in the league in points with 106, No. 4 in goals (47) and finished the season ranked No. 6 in assists with 59. In the tradition of PenguinsÃ¢â¬â ¢ teams that have included Jagr and Lemieux itÃ¢â¬â ¢s now MalkinÃ¢â¬â ¢s turn to cement his legacy in Pittsburgh.

Malkin has been phenomenal in cementing a team that also boasts the likes of Sidney Crosby and a brick wall of a goalie in Marc-Andre Fleury to help the Penguins to their first trip to the Stanley Cup Finals in 26 years.

END_OF_DOCUMENT_TOKEN_TO_BE_REPLACED

I have a beef with a couple of NBA coaches. I love Byron Scott and Doc Rivers. But, they are wrong and need toÃÂ be told so. They are playing players that are hurting their teams.

Bench Peja Stojakovic. Better yet, get rid of him. Yes, I know Peja and the Hornets are done for the season and that the title of this article talks about Ray Allen. But, let me start with Scott and Peja. And, I am not getting down on Stojakovic just because he looks like a child molestor (although he does).

END_OF_DOCUMENT_TOKEN_TO_BE_REPLACED

We saw it at the beginning of the NBA season with the Boston Celtics. The Celtics were the perennial bottom dwellers in the Eastern Conference before a blockbuster trade brought in Kevin Garnett and Ray Allen helping the Celtics return to the forefront of the NBA elite. The Celtics have had their problems, but have been money at home if you play them with your NBA picks.
ÃÂ
We have seen this turnaround phenomenon occur again, this time in the NHL with the Pittsburgh Penguins. This was a franchise that once had the likes ofÃÂ  Jaromir Jagr and Mario Lemieux on the ice at the same time, yet the team seemed to fall off after falling short of the Stanley Cup Finals in 1996. The franchise was struggling to even keep the team in Pittsburgh.
ÃÂ
And as I wrote at the beginning of the NBA season, IÃ¢â¬â ¢ll write it again now, at the end of the NHL season. What a difference a year makes!

END_OF_DOCUMENT_TOKEN_TO_BE_REPLACED

Prior to the Kentucky Derby, you are typically required to lay about $1000 to win $100 on a “no” bet that there will be a Triple Crown Winner. Based on historic win rates, that’s probably about right.

Now that the favorite won the Derby (we picked the three-year-old Big Brown), and won from the 20th post by an sizable margin, the odds have dropped considerably. Current odds:

(Available at Bodog or BetUS or Diamond or Bookmaker)